Skip to content
July 30, 2020
When the main symptoms of crop sulfur deficiency are sulfur-deficient, their appearance symptoms are similar to that of nitrogen deficiency, and the leaves appear light green or yellow. The deficiency first occurs on the leaves of young leaves, generally the young buds first turn yellow and the heart leaves lose green yellow. The plants are evenly yellowed, the stems are weak, the roots are elongated without branching, the flowering is delayed and the fruits are reduced. Sulphur-sensitive crops are cruciferous, such as rapeseed, followed by leguminous, tobacco, and cotton, and those requiring less sulfur are grass crops.
Sulfur symptoms of main crops: rapeseed: The initial symptoms of sulfur deficiency were light green plants, young leaves were lighter than the old leaves, and later the leaves gradually appeared purple-red patches, the leaf margins curled upwards, the flowering and pods were delayed, and the flowers and the ochre colored. light.
Soybeans: The new leaves are pale green to yellow in color, and are uniformly green in color. Older leaves at the late growth stage also have yellowish chlorosis, brown spots on the leaves, thin and weak roots, and poor root nodule development.
Cotton: The plants are thin and the whole plant turns light green or yellow-green, and the growth period is delayed.
Rice: Slow green, no tillering or less tiller, thin and short plants, thin leaves, young leaves are light green or yellow-green, round-brown spots with water-soaked tips, and dry tips. Roots are dark brown, with less white roots and delayed growth.
Reasonable application of sulphur fertilizer method varies with crop types, soil types, and fertilization purposes, and the amount of sulphur fertilizer applied, application methods, and fertilization time vary. Sprinkle application is generally more than the application of Shixue and so on. Water-soluble fertilizers (such as sulphate-type sulfur fertilizers) can be used as base fertilizers, topdressing fertilizers, and seed fertilizers. Non-water soluble fertilizers (such as sulfur-based sulfur fertilizers) are generally used as base fertilizers for early application when used as base fertilizer. It is generally recommended to use sulfate fertilizers such as ammonium sulfate, superphosphate, gypsum, and potassium sulfate. Sulfur fertilizers with highly efficient dispersible particulate sulfur fertilizers. The recommended sulfur fertilizers for different crops are different. The recommended amount of sulfur fertilizer is: grain: 1.3-2.7 kg/mu, beans, oil, vegetables: 2.0-4.0 kg/mu; sugar: 2.7-5.3 kg/mu. At the same time, the application of sulphur fertilizer should be combined with nitrogen, phosphorus and potassium to achieve nutrient balance. Studies have shown that in order for plants to achieve optimal growth, the plant has an N/S ratio of 15:1 to 20:1 and a P/S ratio of 1:1. When crops are fertilized, the N/S ratio is generally 7:1 and the P2O5/S ratio is 3:1.
As alkaline earth improver (gypsum, etc.) when the amount of more than nutrient fertilization, sprinkle the amount of application is generally more than the Shi Shi, acupuncture and other applications.
Sulfur increases yield and yields. In the past 10 years, more than 600 field trials of major crops in China have shown that more than 85% of field trials have yielded significant results, with an increase in yield of 7%-15%, with an average of 10%. Citrus, soybeans, sugar cane, sweet potatoes, peanuts, and tea have the best effect of increasing sulfur production, generally more than 10%.
Improve quality results. Reasonable application of sulfur fertilizer can increase crude protein content of rice and wheat by 10%-27%, oil content of peanut and rapeseed by 6.5%, sugar content of sugar cane and banana by 10%-23%, amino acid content of tea by 6.6%, citrus Vc The content is 4.4%.
Farmers increase income. Rational application of sulphur fertilizer increased the yield and quality of crops, increased the income of farmers, the ratio of sulphur production to food crops was 9:1, and that of fruit crops was 40:1.
Sulfur's main function and role Sulfur is one of the 16 essential nutrients for crops. It is a basic element that constitutes sulfur-containing amino acids and proteins, and is an important component in the synthesis of other biologically active substances and is directly involved in the metabolism of crops. The rational use of sulphur fertilizer plays an important role in increasing crop yield and improving product quality.
Increase crop yields. Sulfur can be directly absorbed and utilized by crops and constitutes the main component of organic substances such as amino acids and proteins in crops. Like nitrogen, phosphorus, potassium and other nutrients, the rational use of sulfur fertilizer can effectively increase crop yields.
Improve crop quality. Sulfur is an important component of bioactive substances such as synthetase and mustard oil, and it promotes the synthesis of protein, oil, and vitamins in plants. Rational use of sulphur fertilizer can effectively increase the protein content of flour, the content of volatile compounds in onions, garlic and mustard, the nutritional value of vegetables and fruits, and the commodity rate.
Improve the utilization of other nutrients.
The rational use of sulfur fertilizer can increase the nutrient utilization rate of nitrogen, phosphorus and zinc, iron, copper, manganese, boron and other trace elements.
In general, the nutrient function of sulfur is similar to that of nitrogen, and the amount of sulfur required by crops is basically the same as the demand for phosphorus. Most crops take 1-2 kilograms of sulfur (pure nutrients) per mu from soil, oil crops, and legumes. Crops, pastures, and some vegetables are more sulphur-demanding.
Why is there a lack of sulfur in soil in some areas of China?
In recent years, sulfur deficiency in soils in China has become increasingly common, and the effect of applying sulfur fertilizers has become increasingly apparent. Soil sulfur deficiency in China is mainly distributed in areas with warm and rainy weather, high degree of weathering, and strong leaching crops; sandy soil areas with low organic matter, light texture, and low substitution; remoteness far from cities, industrial and mining areas, and low sulfur content in precipitation Mountains; southern hilly areas, cold-sweeping fields with strong reducing conditions, areas that do not contain sulfur fertilizers and organic fertilizers for a long time.

Bale Wrap netting from MaoYang are made of 100% virgin material and environmental friendly.

Bale wrap netting are stacked on pallet for delivery and transport. 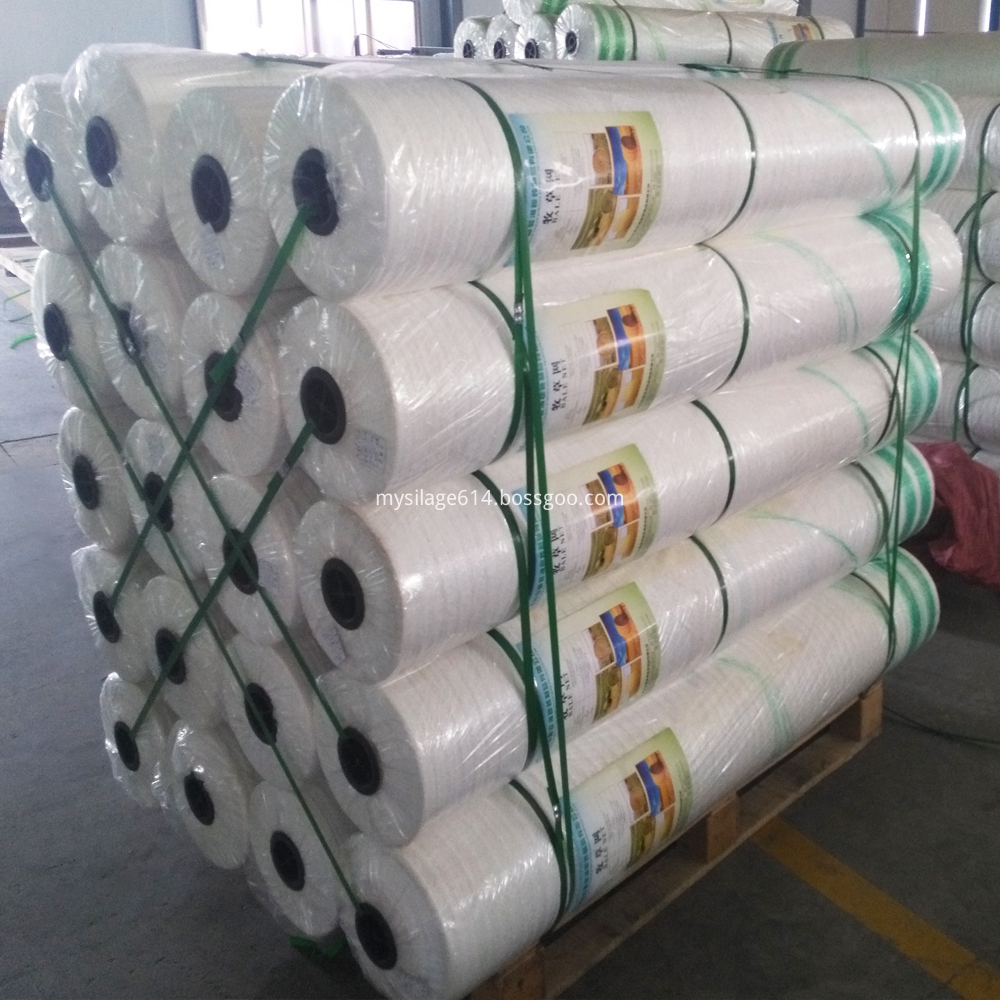